Now that most of the dust has cleared on the 2018 election, OCA members should be acknowledged for having their say about climate in the public sphere. In these fractured times, there’s a need for citizens to state plain truths out loud, and OCA members are to be congratulated for stepping up to the democratic (small-d) plate.

Brian Grad on embracing the future

Trump and the fossil fuel lobby can stall for time. But change is coming faster than you think. ALEX STEFFEN

This Elway poll has some good news for making carbon polluters accountable:

This poll shows that:

1) I-1631 is leading among voters, and it’s clear that Washingtonians don’t trust big oil despite their $21 million in fancy advertising.
2) This election is going to be close, but we CAN win and defeat big oil and their money.
3) Undecided voters will come down to who they trust, and every conversation we have with our neighbors, our friends, and at the doors we knock on is essential to help us win.
This is a moment for us all to step up.  We have a lot of work to do in the next 25 days to connect with voters and remind them of the vision we all share for this state. With your help and all of our hard work, we can do this!

We can’t do this without YOU. Here are some of the ways you can help:

Volunteer door knock – It is powerful democracy in action!  Big Oil is already spending more than $20 million to defeat us, but we have the Power of the People.  Please sign up for a shift here.

Calling voters who might need a nudge to vote – this is a huge priority for the campaign, and we need lots of help. We need to ensure these registered voters turn in their ballots. Here is the link for you to schedule yourself for a phonebanking shift (Human-to-human calls are a very powerful tool!) Here is the link to our dialer toolkit.  If you want to call from downtown Seattle this link has all of Washington Environmental Council’s phone banks for 1631, Sunday-Thursday.

Texting – We are doing texts to help Get Out The Vote. You can sign up for a texting shift here.

Small Business Endorsements -Do you know a small business owner you can ask? Maybe your favorite coffee shop? If you get a yes, be sure to fill out this form and we can get them a sign for their window.

If you want to help in a more substantial way by volunteering full or part time for the campaign, let me know! Or if you can host an organizer from out of town, please sign up here.

Go here to learn more about the YES on 1631 campaign, and its endorsers.

Candidate Forum videos are going up on Peninsula Area Public Access’s YouTube channel as they become available. If you have not had a chance to see the candidates speak in person, check these out! Here is a link where you can check periodically to see when one a new comes online:

With primary election season coming around, it’s time to exercise your democratic muscles and get involved! One way is to inform yourself (and others) about the candidates’ views on climate change and what to do about it. As has been noted elsewhere on this site, individual acts of conscience will simply not be sufficient to avert a catastrophic climate crisis in the coming decades; therefore we must muster the political will to take collective action, and that is what politics is supposed to be about.

Many civic groups, such as Norwester Rotary, the Port Angeles Business Association, and the American Association of University Women, also sponsor candidate forums–check their social media for schedules.

Paul Krugman makes clear how crucial this election is to the fate of our climate.  He’s talking at the national level, but that’s true at all levels.

I-732 would put a tax on carbon that would be balanced by reductions in other state taxes plus a Working Families Tax Rebate.

I-735 would put Washington state on record as calling for an amendment to the U.S. Constitution overturning Citizens United and reducing the power of money in politics.

I-1464 would implement a number of state reforms to level the playing field for candidates and increase transparency in campaign contributions.

State and local races:  the League of Women Voters’ Vote 411 provides a guide to candidates’ positions, including on climate.

Clallam County Commissioner:  a question about climate change was posed during the League of Women Voters debate. 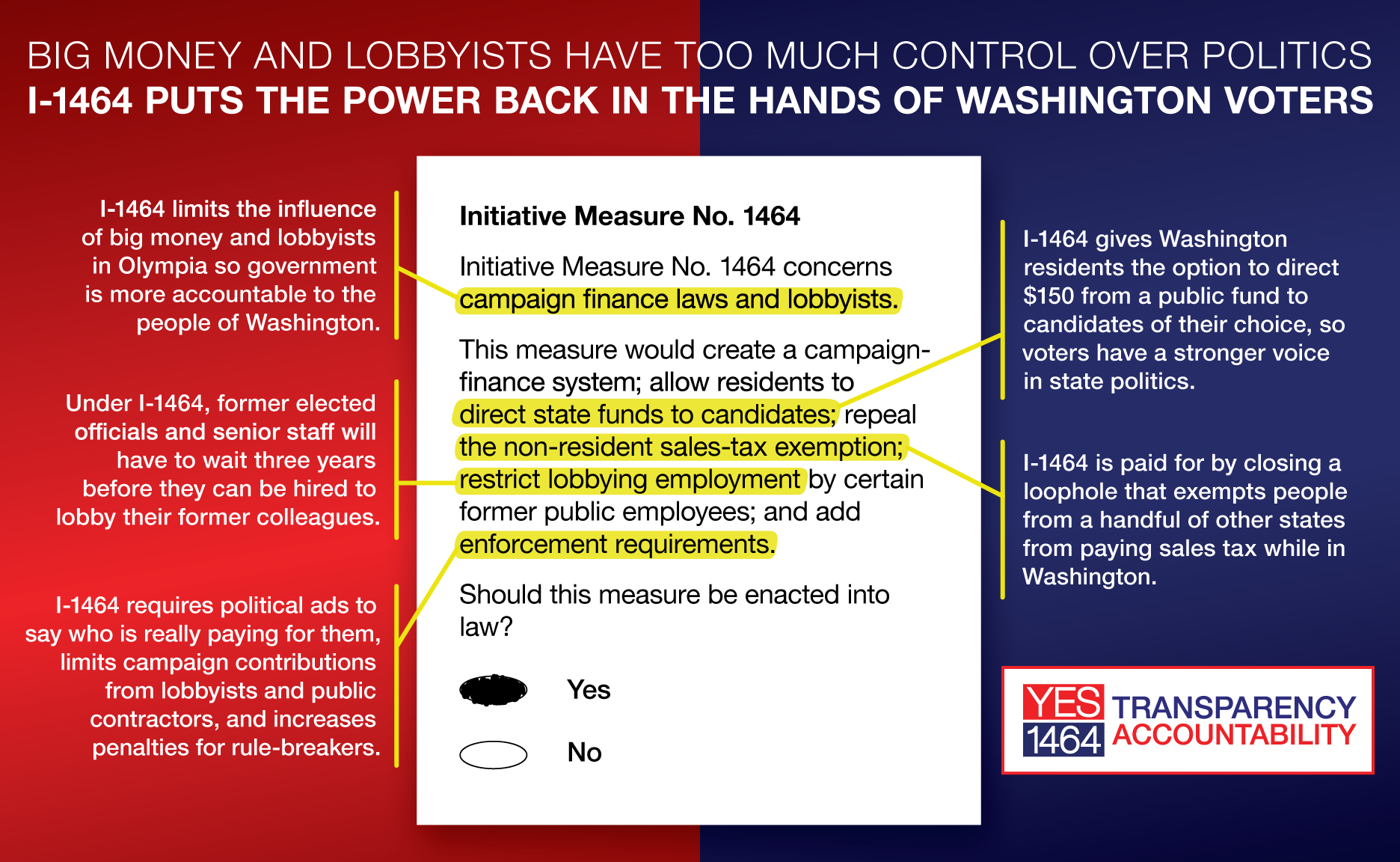 The Earth’s climate is changing and political discussion has become divided over both the science and the best response. What are your views on climate change, and how would your administration act on those views? END_OF_DOCUMENT_TOKEN_TO_BE_REPLACED

Ballots to be mailed Oct. 14

Here are the candidates for Clallam County Commissioner speaking on climate change:

Below are two action requests related to Tuesday’s election, which will influence the course for climate action (or inaction) at the federal level.

If we don’t do more in the next few days, politicians who deny the science behind climate change and want to dismantle EPA programs will win control of the U.S. Congress.[1][2]

That’s why we decided to get involved in this election. And with only a few days to go, we’re pulling out all the stops. Can you chip in today?

Imagine Mitch McConnell as Senate Majority Leader. He’s the coal industry’s best friend in Washington — and McConnell already has said he’ll risk shutting down the government to force President Obama to back off on clean water and global warming.[3]

Whether Sen. McConnell gains this power depends on what happens in a few key states, where environmental champions are in danger of losing to candidates who pooh-pooh climate science, demonize the EPA, and pledge allegiance to the oil industry.[4][5]

We’re putting more organizers on the ground to educate and turn out voters on these issues in the last crucial days. But honestly, we need all the help we can get and we need it now.

Yes, I’ll make a donation. On November 5, we’ll focus 100% on the advocacy and grassroots action we’re known best for. Until then, we’re doing all we can to keep those who want to take our environment in the wrong direction from taking more power in Washington.

I hope you join us.

For the first time in a long time, climate change is a key issue in many of the races that will be decided on Tuesday. Your voice really matters.

Here are two things you can do:

1) Pledge to vote for climate action, and tell your friends to do the same. The climate movement can make a difference in this election — if we turn out in force.

The impacts of climate change get more dramatic by the day, and the influence of the fossil fuel industry continues to warp our ability to see real solutions. But the climate movement is starting to be a force to be reckoned with. Usually we send you emails asking you to join marches, sit ins, trainings, or rallies. We believe those are vital ways of demonstrating and growing power — and we believe that voting is another crucial tool.

That’s right: there’s one local race that could have a huge impact nationally — and you have an opportunity to be part of it now, no matter where you live. In the last couple of weeks, we got word from our allies in South Dakota that the race for Senate there is way closer than people think. Rick Weiland has come out strong against the Keystone XL pipeline and in favor of climate action. It turns out his progressive, anti-Keystone message is resonating with voters across the state, and especially with tribal leaders who have played a crucial role in the resistance against KXL.

Right now, there’s a Native-led grassroots coalition called “Lakota Vote” working to turn out record numbers of people through an eleventh-hour grassroots campaign in Lakota Sioux communities. Native American votes could decide the race in South Dakota this year, and a win in South Dakota could swing the Senate against Keystone.

This year’s election will determine the political playing field during a period when our democracy must grapple with one of the most dangerous and complex threats we’ve ever faced. We don’t have much time to act on climate, and these next few years are a precious window. November 4th could determine whether that window opens or closes.

And for a bit of analysis:

With only a week to go before the 2014 midterm elections, polling from key battleground states indicates a small but widening advantage for Republicans. A six-seat net gain in the Senate would put both chambers of Congress under GOP control, uniting the two houses in opposition to many of the hallmark policies of the Obama presidency, including rules to curb carbon emissions from the nation’s power sector.

Whether a Republican Senate could seriously imperil the president’s Climate Action Plan, as the party’s leadership has promised to do, is another matter. Both House Speaker John Boehner (R-Ohio) and Senate Minority Leader Mitch McConnell (R-Ky.) have indicated in the past several months that climate regulation proposed by U.S. EPA, and specifically the Clean Power Plan (CPP), would be a prime target if Republicans gain control of the Senate. Both responded to the CPP’s proposal in early June by proposing legislation to curb or weaken the rule, although those proposals died in the Senate.

But even if Republicans take the Senate next week, the leadership’s ambitions will likely run up against the basic math of the legislative process. If Republicans pick up the six seats they need to gain control of the Senate, they’ll still be shy of the three-fifths majority needed to override filibusters by Democrats.

And while enough coal-state Democrats might conceivably be swayed across the aisle to beat a filibuster on climate regulation, “it’s hard to think of a plausible scenario where you end up with a [two-thirds] supermajority” needed to override a presidential veto, said Nathan Richardson, an assistant professor at the South Carolina School of Law.

Probably the most important thing you can do right now to protect us from climate chaos is to get involved in this year’s elections; OCA does not have an endorsement policy, but here are some ideas for your consideration:

In a council election unlike any other in the history of Whatcom County, voters sided with representatives believed to be against a proposed coal export facility.   READ MORE »