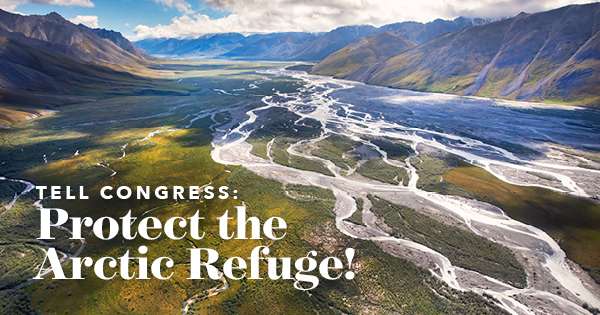 We have an opportunity this year to protect the Arctic National Wildlife Refuge from oil and gas drilling. In 2017, the previous Administration pushed through a bill that changed the purpose of the Arctic NWR to include oil and gas development. That bill required lease sales in the Arctic NWR 1002 coastal plain, which is home to the Porcupine caribou herd, denning polar bears, and scores of migratory waterfowl.

Now, we have the opportunity to protect this remarkable place once again. Now that the COVID-19 package has passed both chambers of Congress, they will turn their attention to an infrastructure package. We want to get Arctic NWR protection language in this bill, to reverse the 2017 language. We are asking your Friends organization to sign onto the attached letter. This particular letter is looking for groups, not individuals. If your Friends Group is interested in signing on, we would appreciate it! We only have 50 groups on so far, and we really would like to get to 100.
Thank you!

This is the letter the Executive Committee has voted to sign, for Olympic Climate Action.

On behalf of our millions of members and supporters nationwide, we urge you to cosponsor the Arctic Refuge Protection Act (S. 282/H.R. 815). This critical legislation would restore essential protections for the coastal plain of the Arctic National Wildlife Refuge while also safeguarding the subsistence rights of Arctic Indigenous peoples. A provision included in the Tax Cuts and Jobs Act of 2017 mandated two oil and gas lease sales for the coastal plain of the Arctic Refuge and despite a failed first sale, without congressional action a second sale is mandated. By restoring protections to the coastal plain, this legislation sides with the vast majority of the American public who oppose oil and gas drilling in one of America’s greatest remaining wild places. Congress must take action to prevent the shortsighted destruction of this treasured wildlife refuge.

The Gwich’in people call the coastal plain “The Sacred Place Where Life Begins” and have relied for thousands of years on the Porcupine caribou that use it as their calving and nursery grounds. Oil and gas development threatens to alter the caribou migration and population and destroy the coastal plain’s natural values, risking the way of life of the Gwich’in and other Indigenous peoples who rely on those values. Considered the biological heart of the Arctic Refuge, the coastal plain also provides critical denning habitat for the threatened Southern Beaufort Sea population of polar bears and nesting grounds for millions of migratory birds. As the most critical part of the Arctic Refuge’s delicate ecosystem, the coastal plain is a perfect example of a place that should be off-limits to oil drilling and industrial development.

Pro-drilling advocates claimed oil and gas leasing in the coastal plain of the Arctic Refuge would provide a $1 billion offset to the 2017 Tax Act. These fraudulent assertions about projected revenues were disproven by the recent Arctic Refuge oil and gas lease sale held in January 2021. A complete financial failure, the lease sale only raised approximately $6 million for the U.S. Treasury, less than 1% of the $1 billion in revenue promised to American taxpayers. The lease sale also failed to receive industry interest, with only half of the tracts receiving bids, no major oil companies bidding, and the state of Alaska placing nearly all of the winning bids. Alaska is considered one of the most expensive sources of oil in the United States to produce, and with the six largest U.S. banks and two dozen international banks adopting policies to preclude financing for Arctic oil and gas development, it is no wonder companies are not interested in drilling in the Arctic Refuge.

Warming three times as fast as the global average, the Arctic is ground zero for climate change. Proposed oil development on the coastal plain would produce an estimated 10 billion barrels of oil, an amount that threatens to release a carbon bomb of 4.3 billion metric tons of carbon dioxide equivalent into the atmosphere. This is equivalent to the annual emissions from more than 1,100 coal-fired power plants and would contribute significantly to the climate crisis. Just the process alone of extracting oil and gas from the coastal plain would create an additional 26 million tons of greenhouse gas emissions throughout the development’s projected lifetime. We need legislation that protects intact ecosystems, not oil and gas development that poses serious biological, cultural and climate threats.

With a second lease sale mandated under the 2017 Tax Act, legislative action must be taken this Congress to prevent a second sale and restore protections for the coastal plain of the Arctic Refuge. Shielding the coastal plain from oil and gas development has long been one of the highest profile conservation issues in the United States — we need to protect this irreplaceable land, now more than ever. It is up to us to preserve important places like this for our children’s children and to respect the Alaska Native cultures that have depended on these lands for generations. We urge you to cosponsor the Arctic Refuge Protection Act to help protect the Arctic National Wildlife Refuge from irreversible harm.