Risks of spills discussed, capped by film The Big Fix 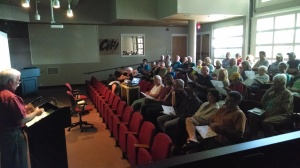 Olympic Climate Action is sponsoring “Oil in Our Marine Waters”, an evening of education and an invitation to action regarding the burgeoning transport of oil in local marine waters, on Friday, July 11 at 7 pm in the Port Angeles City Council chambers, 321 E. 5th St.

This event is part of a continent-wide week of protest of oil transport commemorating the one-year anniversary of the Lac-Mégantic oil-train disaster which killed 47 people in Quebec.

As our region works to cut our fossil-fuel consumption, oil companies are proposing huge shipments of toxic oil-shale and tar-sands fuel from Alberta and the American Rockies, for export through west coast ports.  These proposed cargoes wouldemit far more carbon thanall the mitigation to be achieved in the entire country by improved automobile mileage standards and power plant regulations.  And their transport by rail, pipeline, and ship poses risks to all communities en route, which are being asked to shoulder the risk while the profit goes to the oil companies, whose history and modus operandi are explored in detail in The Big Fix.

If all the proposed new oil port facilities in the Salish Sea region are constructed, the increase in tankers passing the Olympic Peninsula would inevitably increase the risk of spills due to rough seas, equipment failure, and human error.  A large spill would cause major harm to local communities, particularly in the case of Tar Sands oil, a heavy oil that sinks in marine waters and therefore cannot be cleaned up in any practical way.  Much of the increased tanker traffic will bunker (i.e., take on fuel) in Port Angeles Harbor, risking spills that could be particularly devastating to the heart of the Peninsula’s largest community—a community that is about to spend millions of dollars to cleanup this harbor from past damage and is spending even more restoring salmon habitat.

By passing its risks and costs on to the American people while pocketing the profits, the oil industry keeps oil prices artificially low and thus suppresses the development of clean energy in order to extract as much profit as it can from the ground.  A recent report by Exxon explains that although oil is connected with substantial climate risks, the company nevertheless expects to extract all the oil in its reserves.  But if the planet is to stay below 2°C of warming, which scientists believe is necessary to avoid catastrophicrisks for life on earth, 4/5 of the known reserves of fossil fuel will have to stay in the ground.

Olympic Climate Action advocates ending direct and hidden subsidies to fossil-fuel companies and kick-starting the inevitable transition to clean energy.  A recent Stanford University-based study shows how the country could go fossil-fuel-free by 2050 and help the economy at the same time.