Our action is part of a national day of observance sponsored by 350.org. and a prelude to the Global Climate Summit being held in San Francisco September 12-14. Activities include:

* Evening program at Elwha Klallam Heritage Center: Multi-media
presentation of The Road To Athabasca, a chronicle of an epic
bicycle journey along the route of the Trans Mountain pipeline.

This event is free, but donations will be collected to fund OCA’s activities and the opposition to the Trans Mountain Pipeline. Please RSVP here so we can add our numbers to the overall count of people who are gathering on this day for Climate Justice internationally.  You can also keep up to date on this event on our Facebook page.

B&W flyer for the day’s events

Poster: The Road to Athabasca

The Kinder Morgan pipeline project can and must be stopped! Tar sands are one of the biggest climate threats we face, and Houston-based Kinder Morgan is trying to build a massive new pipeline through British Columbia to export this oil. They’ve encountered much more resistance than they expected so they’ve temporarily stopped investment and will decide whether to proceed on May 31. To send a big message to the company before that decision, there will be a huge indigenous-led rally on May 20th in Vancouver. They’ve asked environmental groups in Washington to help support them, so an event is planned that same day in Seattle with kayaktivists in the water and a big rally in Occidental Park. It’s family-friendly and everyone is welcome. This is a pivotal time to take a stand against this project!

March 10, 2018:  Representatives from OCA, Sierra Club and thousands more joined with First Nations in Vancouver BC to resist the Kinder Morgan tar-sands pipeline. They sent a clear message to Prime Minister Trudeau that he does not have consent to allow the Kinder Morgan Trans-Mountain pipeline expansion.

For more information or to donate: https://protecttheinlet.ca/ 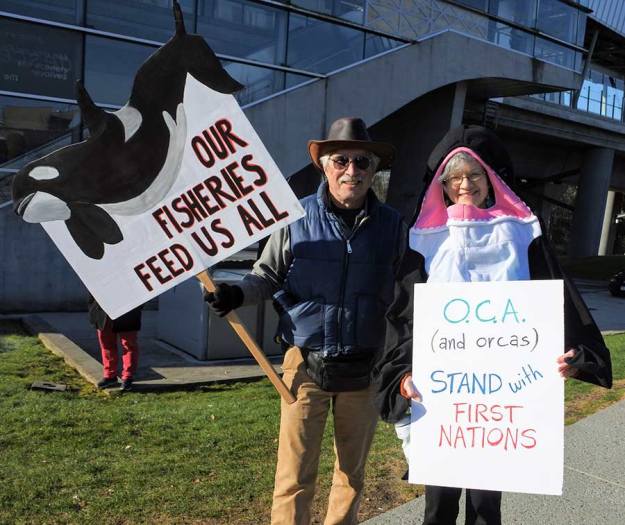 Indigenous-led resistance to the Kinder Morgan tar-sands pipeline will begin March 10 in Vancouver.

(NOTE: Victoria helped organize our local Pull Together events last August in Chimacum and Port Angeles, to raise funds for the fight vs Kinder Morgan.)

This NPR story notes that indigenous groups are becoming increasingly better organized and focused on larger environmental and energy questions, asserting their sovereignty and right to self-determination.

DONATE TO PULL TOGETHER HERE

DONATE TO STAND WITH KWANTLEN HERE

Olympic Climate Action (OCA) joins with the Sierra Club, the Native Connections group of the Unitarian-Universalist Church in Port Townsend, Pull Together, and Stand with Kwantlen to present three nights of entertainment, food and speakers to educate the community about the hazards of the proposed Kinder Morgan pipeline expansion in British Columbia.

The pipeline, which would deliver tar sands oil from Alberta, Canada to port in British Columbia, could increase oil tanker traffic in the region by 700% and would triple the amount of oil currently transorted. At 890,000 barrels a day, it would be bigger than both Keystone XL and the Dakota Access Pipeline.

Tar sands oil sinks rather than floats when spilled and would be virtually impossible to clean up. The spill threat and noise alone could devastate marine life, and the carbon released from burning this oil would compound the already dire consequences of climate change, which have brought this peninsula drought, burning rain forests and receding glaciers.

To fight this pipeline, a cross-border coalition of environmental, indigenous, and social-justice groups has formed under the name Pull Together. This name evokes the traditional canoes that generations of first peoples have used to transit the Salish Sea — the region that encompasses the Strait of Juan de Fuca, Puget Sound, and the Strait of Georgia in Canada. Recognizing that the Salish Sea is a single ecosystem, groups on both sides of the border are recognizing their common interests in protecting this special place. Pull Together is raising funds for a lawsuit against Kinder Morgan based on indigenous rights to clean water, air, and land.

Keynote speaker at the August 22-23 events will be Eric de Place, Policy Director with the Sightline Institute, the leading expert on fossil-fuel export proposals and the threats they pose to our region and the planet.

The program for the August 23 Port Angeles event also features:

Pull Together Campaign from Made You Look Media on Vimeo.

Poster for the Chimacum event

Poster for the Port Angeles event

Poster for the Port Townsend event

Come the Elwha Klallam Heritage Center this Friday, May 19, at 6 PM to join in a discussion of the Legacy of Standing Rock.  Speakers:

Vanessa Castle resided at Standing Rock for five months, until the camp closed. She will discuss her reasons for going, the authorities’ brutal treatment of the water protectors, and how we can take the message of Standing Rock home.

Matt Krogh, of Stand.Earth, protects the West Coast from oil, gas, and coal terminals. He will discuss the Kinder-Morgan pipeline and other fossil-fuel initiatives, and sustainable energy alternatives.

Mike Doherty served as Clallam County Commissioner for 20 years. He will discuss local efforts to protect our communities and what you can do to participate.

The moderator will be Mary Lovell of Pull Together, a coalition leading the fight against the Kinder Morgan pipeline.

Donations are encouraged for Pull Together and the Elwha Heritage Center.

For a larger version of this poster, click here.